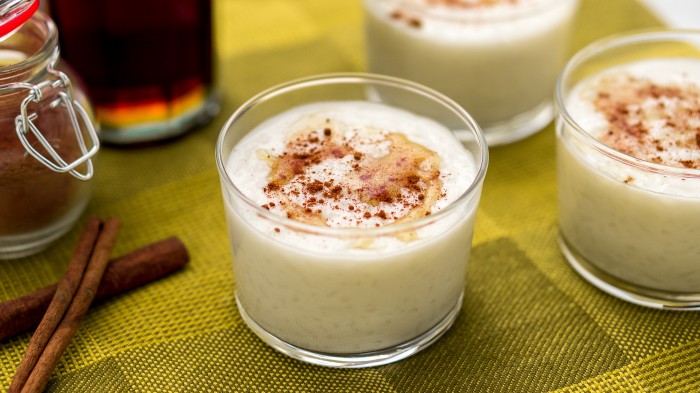 Rice pudding was never a dessert I had growing up, I would see it in abundance and looking dried up on the dessert isle of a buffet. Who has time to stop and ask what that white blob was? I would dash right to the ice cream.  The first time I tried it was at a diner which was included in my Table d’hôte (set menu) pardon my French. It was topped with maple syrup, so it made it pretty yummy, because anything with maple syrup is amazing. I had it again in an Indian restaurant, they make it more liquid and added spices such as cloves, cinnamon, anise etc… That’s what inspired me to make this version of rice pudding.

You have to use the full fat coconut milk in the cans, if you use the ones in the carton it will curdle.

In a large pot add the cooked rice, water, cinnamon sticks, coconut milk and bring to a boil. Simmer on low for about 20 minutes stirring occasionally until the rice has broken up and thickens, add the sugar and simmer for another 10 minutes or until desired consistency. Add more water if it is too thick. The texture will thicken when it is cooled and it will also be a little less sweet once it is refrigerated.

Allow to cool, and then refrigerate until ready to serve. Add cinnamon and maple syrup just before serving.